Wednesday, 1/Dec/2004
The 17th
Wednesday, 1/Dec/2004
Recent exciting news for the Algarve golf world is that an agreement was signed in Vilamoura on 25th October between the International Federation of PGA Tours, the Portuguese Tourist Board and the owners of the Vilamoura golf courses, whereby the Victoria course will host the

Monday, 1/Nov/2004
Officially opened a few weeks previously, the Victoria course was the venue for a tournament held to raise funds for victims of the fires in the Caldeirao Hills during last summer. The individual Stableford tournament attracted 92 players who contributed generously to this worthy cause at the new Victoria course in Vilamoura. The amount raised was close to € 10,000 which helped alleviate in some small way the suffering of those whose lives have been affected. The three main prizes went to players of different nationalities: 1st Zhao Heng Yo (38 points); 2nd and 3rd – Jose Antonio Ferreira and Chris Norman respectively, both with 37.

Monday, 1/Nov/2004
Ever since the Balaia nine-hole par-3 course near Albufeira opened in 2001 they have held regular tournaments. Thanks this year to the generosity of Graeme and Christine Mitchell from Scotland a new permanent annual Cup has been presented to Balaia. For those unfamiliar with the Scottish word

Monday, 1/Nov/2004
During the last week of October, the Tivoli Almansor Golf Classic took place with a field of almost 150 players, mostly from Ireland. The event commenced with a Texas Scramble at Salgados, won by the team of James Mason, Stanley Jelly, Robert Lipsett and Marie Duignam with 55 net. The main Stableford played over three rounds at Morgado, Salgados and the Vilamoura Old Course. There were daily prizes for the best scores for men and ladies, but the overall net winner was Mr. Pat Connolly with an outstanding 127 points, eight ahead of 2nd placed Michael Barret, with Mrs Catherine Connon third on 116. Tony Heverin won the gross prize for his score of 106 points.
Friday, 1/Oct/2004
Four clubs, including newcomers Carvoeiro, took part in this year

Friday, 1/Oct/2004
Boavista G.C. also held a charity event in September that raised close to €4,000 which was donated to both the Lagos voluntary fire brigade and the many victims of the devastating wild-fires that have seriously affected the lives of all the families living in the hills in the Algarve hinterland. Sponsors of the event included Pebble Pools, Luz Ocean Club, Tivoli Lagos Hotel, Fontenario Restaurant and the Ninfa Bar (Espiche), Proper Golf 2000, as well as Boavista club members Brian Chadbourn and Stan Hill.

Friday, 1/Oct/2004
On 9th October, golfers were able to contribute towards charity funds to be donated to the victims of these widespread fires this past summer in the Serra de Caldeirao in the central Algarve. This also provides a golden opportunity for golfers to try out the new Victoria course in Vilamoura on which the tournament is to be played. The minimum contribution is only €100, which includes 18 holes of golf with lunch at the Victoria Club House.

Friday, 1/Oct/2004
The 9th
Wednesday, 1/Sep/2004
The sister course to the Morgado course in the 980-hectare Morgado do Reguengo located north of Portimao has now been seeded. Named the Golfe dos Alamos, the new course is scheduled for opening in about one year. (In case you think the name has anything to do with that famous battle, the Portuguese word

Wednesday, 1/Sep/2004
Another course under construction and due for completion in the Spring of 2006 is the long-awaited Jack Nicklaus designed layout at the future Monte Rei Golf & Country Club. This the first of two 18-hole courses planned for a 420-hectare area located about half an hour drive to the east of Faro. A mere 8% of the project will be built-up area incorporating an exclusive village community and one of the top American landscape architects is involved with the planning of the entire site. The architect of the second course is Ross McMurray of European Golf Design.

Wednesday, 1/Sep/2004
During this past August, Vilamoura held its annual golf-fest for all the youngsters and junior players which involved tuition by the club pro

Sunday, 1/Aug/2004
The Portuguese Golf Federation held its National Seniors Championship on the 4th to the 5th of July at Morgado do Reguengo, the course to the north of the town of Portimao.

Sunday, 1/Aug/2004
On 17th July the 5th ASMAL a charity tournament was held on the Vilamoura Millennium course. This worthy charity organisation helps re-integrate people with mental health problems into the workforce.

Thursday, 1/Jul/2004
The second tournament of the

Thursday, 1/Jul/2004
In mid-June, golfers at 20 courses in 11 countries and 5 continents around the globe played in the

Tuesday, 1/Jun/2004
The PGF and Ford sponsored the

Tuesday, 1/Jun/2004
After the
Tuesday, 1/Jun/2004
At Pinheiros Altos, the team composed of Solheim Cup player Elisabeth Esterl, Ian Cater, Alan Beasley and Doug Moody won with a score of 56 strokes, followed by teams headed by Stefania Croce and Cecilie Lundgreen. The next day at Quinta do Lago, the winning team was Cecilie Lundgreeen with Steve Whittell, Simon Berger and Bob Oliphant (54.4 strokes), with Ludivine Kreutz

Tuesday, 1/Jun/2004
The Gramacho course at Carvoeiro, is hosting the Qualifying event for the

Tuesday, 1/Jun/2004
The Penina Course is once again the venue of the

Tuesday, 1/Jun/2004
The spectacular new Victoria Course designed by Arnold Palmer will be opened for play from the 1st of June making it the 5th course at Vilamoura. The course is a potential candidate to become one of the best in Europe. The course is built on slightly undulating terrain not far inland from the beach, and features large greens and several man-made lakes, many interconnected through gentle cascades. The first course tournament will be by invitation and takes place in June is to honour the golf playing President of Portugal. The next will be the 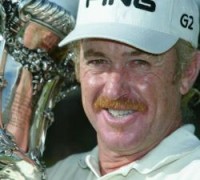 Monday, 1/Mar/2004
Frenchman Julien Foret was the winner of the men
Monday, 1/Mar/2004
Boavista Golf, the new course just west of Lagos, recently hired Paul Tipper teaching pro. Paul is no stranger to the Algarve, having worked at Carvoeiro Golf and Pine Cliffs in the 1990s. Fluent in English, Portuguese and German, he has also given golf tuition at the Biblis Golf Club.

Sunday, 1/Feb/2004
One of the biggest tournaments in the Algarve is the Vilamoura
Sunday, 1/Feb/2004
Vale do Lobo have signed up the PGA European Tour player Brian Davis as a member of their stable of touring professionals for a period of five years. Placed 9th in the 2003 Volvo Order of Merit, Brian had an excellent year with twelve Top 10 finishes. He joins Sweden

Thursday, 1/Jan/2004
Many senior professionals and a handful of amateurs assembled at Palmares and the Penina courses in an attempt to pass the 36-hole pre-qualifying hurdle prior to taking part in the 72-hole
Thursday, 1/Jan/2004
Last month we mentioned our Algarve pro Antonio Sobrinho. Although failing to make the top few to be promoted from the PGA Europro Tour to the Challenge Tour he did however qualify for the last stage of the main European Tour Q-School, played over 6 rounds. Antonio failed to reach his potential and unfortunately missed the 72-hole cut.