Previous Next
Thursday, 1/Nov/2007
The Vidago Course located in the north of Portugal near Chaves is being extended to 18 holes with an opening towards the end of 2008.
Thursday, 1/Nov/2007
Steve Webster - (England) Portugal Masters Victoria Golf Course - Algarve - Portugal - 18th to 21st October, 2007 English golfer Steve Webster won the inaugural Portugal Masters, his second win on the European Tour, after shooting a Sunday 64 to win by three strokes at the Victoria Clube de Golf in Vilamoura, Portugal. This emotional win - especially in view of the untimely death of his mother five months previously - was only his second win in his 12 years on the European Tour, and projected him from 72nd to 28th on the order of Volvo Order of Merit. As followers of the PGA European Tour will have already learnt, 32-year-old Steve Webster was the worthy winner of the inaugural Portugal Masters played on the Victoria Course at Vilamoura. Although, the course was set up to challenge the players with taller clinging rough and fast greens, the rainfall on the Monday really only meant that the large greens were more receptive for the opening rounds. Combines with the warm sunny weather with little wind the result led to low scoring. In fact, and very happily for golfer Martin Kaymer from Germany, a new course record of 61 on the opening day was registered, whilst Webster 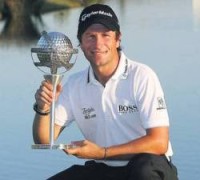 Thursday, 1/Nov/2007
In early October, the Pestana Golf Resort held their annual Golf Festival, a five-day series of tournaments at their Vale de Pinta, Gramacho and Silves courses. This is one of the most popular golf events of the year and a total of 270 rounds were played, with an average of 125 golfers - mainly from abroad - playing in each tournament. The principal prize-winners, shown in the photo, were:
Thursday, 1/Nov/2007
Tiago Cruz won the 22º
Thursday, 1/Nov/2007
The young winners of the

Monday, 1/Oct/2007
As planned, the impressive new club house at Boavista Golf Resort was officially opened. Located by the 18th green, it affords beautiful views over the course and the coastline near Lagos. The building boasts extensive locker rooms, a 150 seater restaurant, private function room and a well stocked golf shop. There is also a heated indoor pool, gymnasium, steam room, sauna and spa as well as extensive sunbathing terraces and a children’s outdoor pool. Boavista Resort

Monday, 1/Oct/2007
The Belas Golf Course just north of Lisbon, was the scene of the semi-finals of the

Monday, 1/Oct/2007
The Estoril course was the annual scene for the much sought after 13th

Monday, 1/Oct/2007
The first Pairs Championship was held in Porto Santo off Madeira and was won by Paulo Silva and Ricardo Mendonca.

Monday, 1/Oct/2007
The Visabeira Turismo Team were the winners in the Beiras regional finals of the

Monday, 1/Oct/2007
The Portuguese Seniors Golf Team gained fifteenth place, in Gothenburg in Sweden, in the 26th
Saturday, 1/Sep/2007
Vilamoura Golf Club
Saturday, 1/Sep/2007
The Seve Ballesteros designed Quinta do Vale course near Castro Marim in the extreme east of the Algarve alongside the Guadiana River separating the Algarve and Andalusia is due to be ready for play in the next few months. Over-seeding with cool season grass on the Bermuda fairways has been carried out recently. Similar to the course opened in 2004 on Porto Santo Island that Seve also designed, Quinta do Vale has an equal number of six par-3, par-4 and par-5 holes.

Saturday, 1/Sep/2007
In September, the Boavista Golf Club near Lagos which recently inaugurated its new Club House building, is staging an amateur team event for charity in aid of three institutions that take care of orphans, handicapped children and those with learning difficulties. Twenty firms and organisations are helping to sponsor the competition, and after the prize-giving the club is holding an auction for valuable prizes in its new Club House to boost the charity fund-raising efforts.

Saturday, 1/Sep/2007
In the very north of Portugal on the Ponte de Lima Course, a round of the Spanish

Wednesday, 1/Aug/2007
Through well-known local golf pro, Tony Bennett, who runs teaching centers at Alto Golf (Alvor) and Quinta da Ria (Tavira), the writer received a kind invitation to play in a team event at the testing Penha Longa course, west of Lisbon. Organised by Tony and his wife and son, the tournament was sponsored by the Multi-Development Group which operates in 20 European countries designing, constructing and managing shopping centers. Established In Portugal for 17 years the company has set up many such golf complexes throughout the country.

Wednesday, 1/Aug/2007
The 36-hole 7th Vilamoura Casino invitational tournament was staged at the Victoria and Old Courses at the beginning of the month. Getulio Jorge was the winner with Romeu Goncalves in second place. Part of the Solverde annual circuit that culminates will be in September at the Oporto Golf Club. This was the first course in Portugal and one of the first of a handful in continental Europe and in fact, dating back to 1890. The ten leading players qualified for this year

Wednesday, 1/Aug/2007
As in the past two years, the 3rd
Wednesday, 1/Aug/2007
The San Lorenzo Course provided their golf course to hold a charity event organised in aid of the Associacao Oncologica do Algarve for its Casa Flor das Dunas project. A total of 93 players took part and G. Sloan won the men

Wednesday, 1/Aug/2007
The Salgados Course near to Albufeira has last month inaugurated their smart new Club House which offers players and their guests many more facilities including a Spa facility.

Wednesday, 1/Aug/2007
Estoril Golf was the location for the annual

Wednesday, 1/Aug/2007
The Montebelo Course at Viseu recently inaugurated their additional nine holes to make 27. This course was also the location for the

Wednesday, 1/Aug/2007
The Golden Eagle Course was for four days the scene of intense activity as the

Wednesday, 1/Aug/2007
The Portuguese team Landidor consisting of Carlos Tinoco, Joao Vinagre, Artur Ferreira and Joao Navega, were the winners of the
Sunday, 1/Jul/2007
The

Sunday, 1/Jul/2007
Many footballers together with several UK entertainment personalities were also very much in evidence at Parque da Floresta where former England and Arsenal goalkeeper David Seaman staged his sixth annual

Sunday, 1/Jul/2007
The fabulous North course at the Monte Rei Golf & Country Club has now been opened for pre-view play. It is the first of two intended Jack Nicklaus designed

Sunday, 1/Jul/2007
In June the Oporto Course held their famous and popular annual

Sunday, 1/Jul/2007
The Montbelo Course near Viseu hosted the 10º Anniversary of the

Friday, 1/Jun/2007
Sir Henry Cooper and Mike Reid, together with another 22 celebrities playing alongside 3-golfer teams, were back in the Algarve in May for the ninth consecutive year

Friday, 1/Jun/2007
The Ladies European Tour will hold the

Friday, 1/Jun/2007
On the 9th of May some 50 members of the Royal British Club of Lisbon held their annual

Sunday, 1/Apr/2007
Daniel Vancsik - (Argentina) Madeira Islands Open Santo da Serra - Madeira - Portugal - 22nd to 25th March, 2007 Daniel Vancsik became the 9th Argentinean to win on the European Tour with his success in the Madeira Open. This win will be an impressive boost to his present game as he has struggled to return to his previous form. He was one of the South American 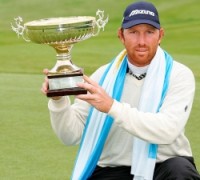 Sunday, 1/Apr/2007
Pablo Martin Benavides - (Spain) Estoril Open de Portugal Oitavos - Lisbon - Portugal - 29th to 1st April, 2007 In the 1.145th event held by the European Tour, history was made by Pablo Martin-Benevides, when he won the event as an Amateur. Prior to the final round the Swedish Alexander Noran had been leading the way but had little success on the final day. It became a tense final 18th hole when Pablo won by one stroke from Frenchman, Jacquelin Raphael. His first important event was the 2003 Canaries Open of Spain when he at the age of seventeen led until the final round. Unfortunately, he dropped away and finished in a tie for 22nd place. His outstanding success as an Amateur has firmly placed Pablo on the international stage in the golf world for when he turns Professional which is anticipated as taking place in the Autumn of this year. The Spanish player jumped to Nº 280 from his previously non-ranked position. He began the week in 11th place on the World Amateur Golf Ranking and this ranking position is sure to improve after his unique victory. 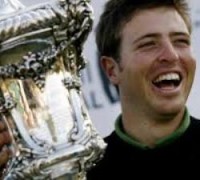 Sunday, 1/Apr/2007
The Oceanico Group, headed by Gerry Fagan and Simon Burgess, last month acquired five important courses at Vilamoura to add to their portfolio of the further two in construction at Alcantarilha in the Algarve, another course being built near Obidos which lies to the north of Lisbon, plus the further two established courses in the Azores. Although basically a Development Company this new acquisition now places Oceanico Group in the
Thursday, 1/Mar/2007
The dominating item of golf news of recent days has been the purchase of all five Vilamoura courses by Oceanico Golf Group. After 12 years of tenure by Andre Jordan Group of Lusotur Golfes, S.A., during which time the Millennium and Victoria courses were built and the other three (Pinhal, Laguna and Vilamoura Old Course) upgraded, this well-established golf destination now looks forward to an even brighter future. A 25-minute drive west along from Faro is the site where Oceanico are building their two golf courses and residential complexes, the
Thursday, 1/Mar/2007
Another change in ownership of Algarve golf courses occurred previously when some weeks ago the CS Group (owners of the 5-Star Sao Rafael Hotel in Albufeira), purchased the Morgado and Alamos courses near Portimao including the property development assets of the Herdade do Morgado de Reguengo from the Tivoli Hotel Group.
Thursday, 1/Mar/2007
The 77th