Previous Next
Thursday, 1/Dec/2005
WGC - Algarve World Cup in Portugal Victoria - Algarve - Portugal - 17th to 20th November, 2005 The Welsh Team composed of Stephen Dodd and Bradley Dredge beat both English and Swedish Teams by two strokes. The event had been shortened to just 54 holes due to bad weather. After the opening day better-ball, with England

Thursday, 1/Dec/2005
At the Vale de Pinta Course the PGA European Seniors Tour Qualifying School Finals were also affected by storm damage on the opening day but course maintenance staff, aided by many volunteers, made massive efforts to make the course playable. Full cards to play on the 2006 Tour were available for the top six players and conditional ones for a further eleven. It was 56-year-old Aussie, Stewart Ginn who came out on top with a steady 72-hole total of 274 (10 under par), with only 4 dropped shots. Until now Ginn who plays on the US Champions Tour, and winner at the

Thursday, 1/Dec/2005
Palmares Course was the venue of the 1st

Tuesday, 1/Nov/2005
During the second week in October, the Quinta de Cima course near Tavira in Eastern Algarve hosted the

Tuesday, 1/Nov/2005
The November golfing calendar is of course dominated by the anxiously awaited

Saturday, 1/Oct/2005
On 20th September, the PGA European Tour and the Le Meridien Hotel Group announced that the

Saturday, 1/Oct/2005
The most important golfing fixture in the Algarve in October will be the
Saturday, 1/Oct/2005
The 10th
Saturday, 1/Oct/2005
Looking a little further forward to November, the
Saturday, 1/Oct/2005
Both local Algarve players Antonio Sobrinho and Inder van Weerelt passed the 1st Stage of the
Thursday, 1/Sep/2005
The long drought has given headaches to owners and green-keepers alike and many water hazards which act as reservoirs for irrigation are almost dry. Several courses are sensibly irrigated with re-cycled water, suitably purified at treatment plants, and the Castro Marim course close to the Spanish border, has since its inception used a clever underground watering system that incorporates
Thursday, 1/Sep/2005
During the second fortnight in August, Vilamoura Golf Club held its 9th Junior golf school that culminated in the traditional 2-day Junior Tournaments. The event is held on the Laguna course, and support of sponsorship and generosity of several local companies and organisations, individuals, club professionals and club members in addition to the course owners, Lusotur Golfes. Over 100 keen youngsters, from both Portugal and abroad participated including the usual strong contingent from neighbouring Andalusia. Results were with Beginners without handicaps - 2 divisions, Stableford, by age – Under 10

Thursday, 1/Sep/2005
On 3rd September, a Texas Scramble for teams of 4 players was held on the Gramacho course to help raise funds for the Lagoa Volunteer Fire Brigade

Thursday, 1/Sep/2005
The Boavista Golf Club is hosting a Charity Day on 10th September, the beneficiaries being the Lagos Orphanage and the Pirilampos Orphanage in Albufeira. The tournament will be played by 4-player amateur teams with the two best scores per hole to count, with prizes for the 3 leading teams as well as extra individual prizes.

Wednesday, 1/Jun/2005
The May edition of respected magazine Golf Digest published a list of the best 100 golf courses throughout the world less those in the USA. Headed by the St. Andrews Old Course, this list included two in courses in the Algarve. The perennial favorite of San Lorenzo was in 38th spot (the best in the Iberian Peninsula) and the Vilamoura Old Course, ranked 84th. The revered Valderrama Course in Spain was rated at a surprisingly 75th place. The magazine also included a ranking of the top 20 courses in Portugal, the first eight of which are located in the Algarve. The new Victoria course in Vilamoura and the venue of the 2005 Algarve World Cup in November was placed in 13th position, but it also appears that the selectors completely bypassed the excellent Quinta da Ria and Quinta de Cima courses in the Tavira area.
Wednesday, 1/Jun/2005
After several months of negotiation the

Wednesday, 1/Jun/2005
On the 6th May the legendary golfer Arnold Palmer paid his long-awaited return visit to the Victoria course that he and his team designed. After demonstrating his skills on the driving range Palmer played a 9-hole exhibition round on the course delighting the spectators. The timing of this visit coincided with the 6th 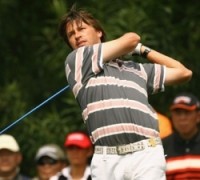 Friday, 1/Apr/2005
Earth-moving has commenced on the Sandy Lyle designed layout near Silves owned by Pestana and will be a sister course to the Gramacho and Vale de Pinta courses.

Friday, 1/Apr/2005
Vila Sol has appointed Peter Lester to be the resident professional at its recently upgraded Golf Academy beside the resort

Friday, 1/Apr/2005
An exciting new
Friday, 1/Apr/2005
Golf continues to expand in the Algarve and three new projects have been started. The most advanced is the Alamos course which should be ready toward the end of this year. It will be located alongside the Morgado do Reguengo course but will not have a playing length as long as the latter.

Friday, 1/Apr/2005
In eastern Algarve landscaping of the first of two courses designed by Jack Nicklaus is in progress. These are part of a large property development near Vila Nova de Cacela called Monte Rei Golf & Country Club, and the first course is due to open in about a year
Tuesday, 1/Mar/2005
The 13th International
Tuesday, 1/Mar/2005
On 29th January, one of the largest and outstanding annual charity event in the Algarve chose the Vilamoura

Tuesday, 1/Mar/2005
Palmares held their well-known annual Almond Blossom Championship week in early February with brilliant sunshine throughout, although unusual frost welcomed the early starters. Golfers who were able to master the lightning fast undulating greens topped the leader-boards in the four separate tournaments, and the overall winners therefore deserved their well won prizes. In the opening competition William Milliken won the men

Tuesday, 1/Mar/2005
A total of 260 amateurs from 14 countries from Europe, N. & S. America and Africa, played in the 72-hole
Tuesday, 1/Mar/2005
Le Meridien Penina staged the 10th Henry Cotton Team Trophy on the 26th-27th with 21 four-player teams taking part. Included were teams from clubs with which Sir Henry in his lifetime had close connections, such as Temple, Ashridge and the Penina itself. The team comprising PGA European Tour staff, Ian Barker, James Finnigan, Gary Tait and M. Lichtenhein, cruised to victory with a total of 165 better-ball Stableford points, nine ahead of local team, GMDA, with the Le Meridien team a further point behind in 3rd place. The best individual prize for golf writers playing in the tournament went to Jeremy Elmwood with a score of 72 points.

Tuesday, 1/Feb/2005
After the semi-lull of December and January low season for visiting tourist golfers (the main low one being the hot summer months), the Algarve main season has teed off with countless luggage trolleys at Faro airport loaded down with bulging golf bags. Some of the local golf courses and especially those owned by hotel chains have found it advantageous to offer special winter package deals. Each year the courses are now beginning to see more use during the December and January period. Visiting golfers have been extremely lucky this winter with extra fine sunny weather although, crisp early mornings with a touch of ground frost have occasionally been a feature. The downside has been the general lack of rain throughout large parts of the country and the usual fine condition of the courses in the Algarve has proved to be extremely difficult to maintain. Courses with Bermuda grass are particularly vulnerable to cold weather as it hibernates and turns straw coloured in the winter. In March and April there will likely be some relief to the course owners and their concerned green-keepers. However, yesterday the writer drove to play a match on a course about 100 kilometres from home but the event was cancelled after playing only one hole due to the rain and a particularly strong cold wind.
Saturday, 1/Jan/2005
The 17th edition of Vilamoura
Saturday, 1/Jan/2005
After a sequence of 7 years ending in 2004 and during which the