Previous Next
Friday, 1/Dec/2006
Lady Joan Bader was back in the Algarve again this November to officiate at the grand final of

Friday, 1/Dec/2006
The 28th annual Open run by Portuguese Airline TAP, attracted 250 amateur golfers which including 70 ladies from 14 countries. Many were Portuguese expatriates who took this opportunity to visit their country of origin. One of such was this year
Friday, 1/Dec/2006
There was an exciting conclusion to the PGA European Seniors Tour qualifying school staged at the Vale da Pinta course in the Carvoeiro area. All the usual sudden death play-offs for the top six full cards and 11 provisional cards for the 2007 Seniors Tour season created a sense of keen competition. However, two players created a stir when Spain

Friday, 1/Dec/2006
The Algarve Tourist Association has offered to host the International Golf Travel Market in 2008. This event was last held in the Algarve in 1999 at Vilamoura, when the region was nominated the best established golf destination by IAGTO (International Golf Travel Agent Association). This award given to the Algarve again in 2005. The IGTM board is at present analyzing the various 2008 venue applications and the result will be published in the near future.
Sunday, 1/Oct/2006
Early in September the 4th Portuguese Cardiology Foundation tournament was played on the fine 18-hole course Quinta de Cima. Many of the 88 participants driving down from Lisbon and much further a field. The two-player better-ball team event was won by Tiago Almeida and Luis Pereira with a net medal score of 58 strokes, edging out two other teams with scores of 59 and 60.

Sunday, 1/Oct/2006
After another exceptionally hot summer which extended into September which was tempered by a few rain showers, we are back into the golf season when one can witness hundreds of trolleys with golf bags being wheeled out of Faro airport. Some of the golf tourists come to play the courses just over the Spanish border along the Costa de la Luz. By far the vast majority are attracted to the thirty-odd fine courses spread along the coastline of the Algarve which is enjoying its second times award as the World
Sunday, 1/Oct/2006
As usual several charity events are held in the summer to raise funds. An example of such is the annual

Sunday, 1/Oct/2006
Former footballer, John Aldridge, is hosting the 5th edition of his

Friday, 1/Sep/2006
The biggest date in golf coming up soon is Penina

Friday, 1/Sep/2006
On 6th and 7th of November, some local preparatory competitions are being held for the grand final on the 8th to decide the winners of the

Saturday, 1/Jul/2006
The 54-hole Portuguese PGA event staged at the Morgado course near Portimao was won convincingly by Antonio Sobrinho sponsered by Vale do Lobo with an aggregate of 14 under par 205, nine strokes clear of Nuno Campino (Paco do Lumiar/Callaway). Sobrinho, second in the national Order of Merit behind Jose Filipe Lima, who presently plays on the European Tour. In the opening round he established a new course record of 64 on the par 73 layout and giving him an unassailable lead. Alfonso Mohedano (Andaluzia PGA), was third, followed by Ricardo Santos (Lusotur Golfes), Sean Hawker (Prosecom) and Christian Wesserlund (Quinta da Ria) tied 4th on 2 under par. The Pro-Am was won by Morgado resident pro, Nelson Cavalheiro, partnered by the course golf director Jorge Papa with a score of 64 after a count-back.

Saturday, 1/Jul/2006
On 13th-16th July, David Seaman and his many celebrity friends will be taking part in his

Thursday, 1/Jun/2006
The Alamos course at Morgado de Reguengo is now in fully playable condition after its completion was seriously hindered firstly by the 2004/5 drought and then some torrential rainfalls last winter. It has several tight fairways, and a number of severely undulating greens that will test the patience of all standards of golfers. One of the first local tournaments to be held on the scenic layout is the 36-hole

Thursday, 1/Jun/2006
In mid-May, the Morgado course also hosted the

Thursday, 1/Jun/2006
Salgados was the venue of a competition on the 8th APDC (Portuguese Assn. for Communications Development) calendar on 20th May, organised by Sr. Joao Patricio and his team from the publishers of Clubehouse Magazine. Apart from association members and sponsors the field included guests from the host club, the Architect

Thursday, 1/Jun/2006
The Penina Championship course staged its annual tournament for the prestigious Sir Henry Cotton Trophy on the final Sunday in May. Local knowledge was obviously the key to winning as club members were well represented in the five leading players. It was the lady captain, Ulla Bischoff, who had her name engraved on the cup by carding a 4-under score of 69. Three strokes behind her were Doug Moody, Pedro Rio and Pim Hirschmann, followed by Peter Hills in 5th place on level-par 73. Prizes for the best ladies and mens gross scores went to Ann Munro (88 strokes) and Steve Juster with a well gained 75.

Thursday, 1/Jun/2006
The Qualifying School for 14 places on the 2007 PGA Seniors Tour will be held once again in the Algarve this year. Quinta de Cima and Pinheiros Altos will host the Stage One qualifiers on the 16-17th November, followed by the 72-hole final at the Vale de Pinta course at the Pestana Golf Resort, Carvoeiro on November the 20th-23rd.

Monday, 1/May/2006
It was recently reported by the local tourist and golf authorities that March was an all-time record month for the number of golf rounds played on Algarve courses. The tally came to 126,597 rounds, an 8.3% increase over the equivalent month last year. Vilamoura courses alone registered an increase of 21.7% for March, and even more (25.9%) for the first fortnight in April. This is mainly due to the strong marketing and also as a consequence of having staged the
Monday, 1/May/2006
In mid-April, the Junior Algarve versus Andalucia match was held on successive days on a home-and-away basis. The format for the 10-player mixed boy and girl teams was match-play with two foursomes and six singles matches, and after the first day at the Vilamoura Millennium course the scores were level on 4 – 4. It seemed that home course advantage would lead to victory for the Spanish youngsters at Isla Canela which is a course in Spain. Incredibly the second days play ended in another tie and the teams were locked on 8 points each. The match was therefore decided by a sudden-death play-off and Joao Carlota for the Algarve team - which incidentally comprised of only juniors from Vilamoura - beat Oliver Ruiz at the first hole.

Monday, 1/May/2006
Later in the April another international match between local and Spanish players the visiting players were more successful. During last year’s

Monday, 1/May/2006
Vila Sol is holding an international Golf Challenge involving a total of 68 qualifying rounds at selected courses in 15 countries in both Europe and North America. The event has the backing of the Tourist Board and other tourist orientated associations and the sponsorship of several private companies. The qualifying competitions started in March and will end in October and the finals will be held on 18th and 19th of November on both the Vila Sol and Victoria courses in Vilamoura. 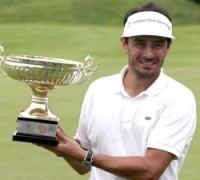 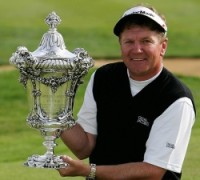 Saturday, 1/Apr/2006
At the end of March your golf correspondent made a foray into new golfing territory in Portugal, away from the Algarve to accompany a group of European Golf Writers on tour. Organised by Esay Golf Management, a joint-venture firm between the Portuguese Grupo Espírito Santo (GES) and Aymerich, a Spanish golf course owner and Management Company. GES amongst other things also own the well-known Tivoli Hotel chain in Portugal. The six-day excursion commenced at the Tivoli Almansor Hotel in the Algarve and the group of almost thirty golf writers from several European countries were invited to play 9 holes at the Morgado de Reguengo course and view the new Golfe dos Alamos layout alongside which will be officially opened this June. The visitors
Saturday, 1/Apr/2006
The Ribagolfe I & II plus Santo Estevao (a Donald Steel design), courses which all opened in 2004. All three are beautifully laid out in gently undulating terrain of the northern Alentejo and covered mainly by mature cork oaks. Ribagolfe I, designed by Peter Townsend, is a particularly challenging course although the others hopefully can be rated close behind.

Wednesday, 1/Mar/2006
The Portuguese President, Jorge Sampaio, attended the launch of a book on the Algarve World Cup edited by Lusotur Golfes S.A., held at Belas Clube de Campo. This occurred on the same day that the inaugural

Wednesday, 1/Mar/2006
The well-organized 4-day Divot Tournament took place at the Palmares course with a daily field of about 40 players. Three different competitions were held, the main one being a 36-hole individual Stableford for the Divot Trophy. In the opening Texas Scramble, the team comprising of Janet Kaye, David Minns, Ken Harvey and former Portuguese international footballer Amilcar Fonseca took the top prize. The Better Ball pairs Stableford was won by Sue Dicken and Dennis Martin, whilst the Divot Trophy went to Stuart Buckley who is a recent arrival in the Algarve. Tony Seal and Jeff Hardman followed closely behind.

Wednesday, 1/Mar/2006
The next big upcoming attraction golf-wise is the

Wednesday, 1/Feb/2006
For the second time in six years the International Association of Golf Tour Operators (IAGTO) nominated the Algarve as the best established golf destination, one of its most prestigious awards. Regardless of a lack of rain during the autumn, there was an upturn in business and the courses announced a total of almost one million rounds of golf played. December and January are normally slow months due to the Christmas season but a reasonable numbers of golfers visit to take advantage of the emptier courses. Also, during the while year there are a number of tournaments held for both local and visiting players. One of these is the annual visit of the
Wednesday, 1/Feb/2006
In December, Lusotur Golfes, held their flagship medal-play tournament
Wednesday, 1/Feb/2006
The last qualifying event for the finals of the 15th